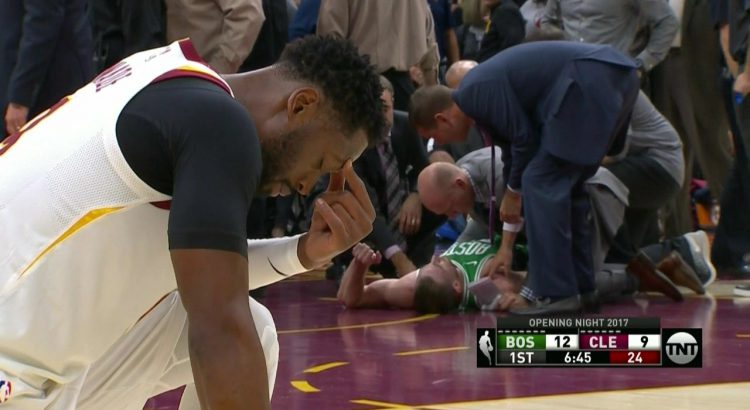 Civilization has a very thin veil. I have always known that we are one event away from mass hysteria. This is the human condition. When push comes to shove and the human protectionism instinct kicks in, watch out. This is why I have never trusted a crowd.

Lately the veneer of peace seems thinner than ever. In an age of angst, protest and discontent, we tend to focus on the maladies of culture and sometimes fail to miss the hope.

Last night, I saw something that demonstrated our humanity beyond the headlines. If you missed it, last night, during the much anticipated Celtics vs. Cleveland NBA match-up, Gordon Hayward went up for an alley oop dunk only to land awkwardly, his foot finishing the play in  a direction that is anatomically opposite of what is intended. Absolutely gruesome.

Before many of the players on the court even knew what happened, you could tell by the reaction of the Cavaliers bench and the crowd that Hayward was in serious trouble. People literally backed up a few feet, many covering their eyes.

What happened next was reverent and something that a spiritually discerning person might call divine. Time seemed to slow, Kyrie buried his head in a teammates breast and cried, others gathered together and prayed and Dwyane Wade took a knee with head bowed. Unity, true empathy and concern prevailed.

Here on a national stage, white and black came together and showed a compassion for one another rarely seen in the midst of all the social chaos we live amongst. Issues were humanized. If you don’t know Hayward, he is one of the whitest guys in the NBA, not only is he pasty white, he played in Utah for years, a state considered by some to be very intolerant. To top it off, he wears a hairstyle akin to white nationalist. He is not. He is actually anything but that. Hayward is actually one of the most respected and loved players in the NBA; a league that is majority black. Gordon goes about his business with an old school attitude and a lunch pail in hand. He walks with a dignified humility that speaks well of the game, but might not be deserving of his talent.

After setting Hayward’s leg on the court and loading him on the stretcher, Lebron James came over to wish him well. The King was shook. Kyrie’s emotion filled comments after the game showed how much he truly cares for Hayward and for one night, tragedy brought us together.

Last night’s moment of solidarity is not going to fix what ails us in the human condition, but for a moment, if only brief, we saw behind the headlines. We saw hope and witnessed a microcosm of what might be possible in the world if we begin to live beyond the headlines and truly share in each others struggle.