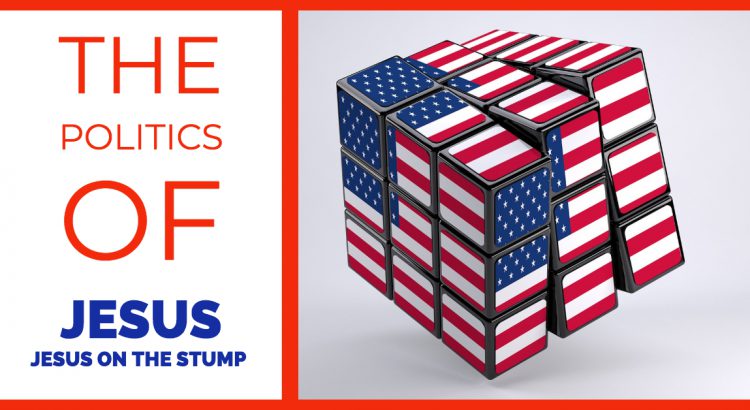 We love to imagine Jesus on the stump and us as his stump speech writer, sitting somewhere joyfully behind the scenes as Christ blast away at political opponents. Few people though, when thinking about how Christ would weigh in on a certain political hot-button topic stop to think about the actual politics of the place and time Jesus existed. Instead, we extricate Jesus from any historical context, put him in a blue blazer with a copy of the Federalist papers in his hand and espouse what his views on a host of political topics would be based on our own highly biased and tightly corralled modern opinions.

The context of Jesus’ social and political world must be considered if one views context of value. And we must. Jesus a first century Jew, was from a failed theocracy, a political system meant to have God as its sovereign and its priest and judges acting as mediators of that supreme hierarchy. Instead, Israel demanded a king and got one. Check that, they got many and most all gave them the same results, oppression and more loss of inherited territory. By the time Jesus hits the scene, Kings David, Solomon and Joash are long gone and the nation had been upended and conquered by one of the most dominant societies of all time, the Romans. (Say it again, and this time with the Monty Python accent “The Romans”.)

At the same time, as you will see throughout the book of Acts, a secondary shadow government, run by the Jewish ruling elite and council were also trying to carry on with a government within a government and implementing Jewish laws under the very watchful eyes of the Romans. This is something that  Rome allowed as they had become masters of the art of conquering and knew that some form of self-rule must be allowed to stem revolt.

Like the church today, Jesus found himself on the razor’s edge of being part of two political systems, both vying for hearts, minds and territory.

Perhaps the most important thing to remember when trying to descend into the wormhole and assume the understanding of Jesus politics is to remember that Jesus was not running for office.

The temptation to make Christ a political figure for one’s purposes is a strong potion. It is as true today as it was back in Jesus day. In trying to damn Jesus to the cross, the Jewish leaders protested to Pilate that Jesus was declaring himself a king trying to overthrow Roman rule. On another occasion, the Jewish people, so enamored by Christ’ power tried to make him king by force. Many believe that Judas, Peter and the other disciples followed Jesus at first not for the kingdom he was offering, but for the earthly one that they imagined. This illusion would be dismantled on the night Jesus allowed himself to be led away for conviction.

Thus, before we get into messianic policy making, we must come to a reckoning with the fact that while Jesus actions and words cataclysmically rocked the political world of its day, Jesus himself was not political, at least not in the way that we understand politics. Here again we come to another question. If Jesus was not intentionally political, than what would the politics of Jesus be?